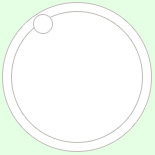 What A Recursor Knows About Nexus

Nexus is a flat plane, oval in shape, with two habitable sides, Overside and Underside. Surrounding the plane is a space of perpetual dawn and twilight, home to the recursion’s two constantly warring gods. The power struggle between them in the sky is reflected in the cycle of day and night on the plane below, and the Sun-Wreathed Lord has an advantage. Excessive sunlight is withering the crops on which the humans of Underside depend, and tensions are high between the Skycults and the Scorekeepers.

Today, most life on Nexus resides in Underside. There are a dozen small human settlements, with two more in ruins in the Rivenswood. Each settlement is home to two or three thousand inhabitants and a mayor; the two most powerful mayors are the Solarator and Siderator (Eliana and Hilian, both level 6), who lead the Skycults.

The Skycults direct the worship of two gods, the Moon-Veiled Lady and the Sun-Wreathed Lord. Each god is strengthened by prayers and ritual devotions, and their power influences the length and intensity of night and day.

Balance between them is essential to the agriculture that feeds Nexus, and in order to maintain it the Skycults demand obedience and a strict weekly routine from every adult—days cycle between field work, trade work, and worship. Children are raised by dedicated Skycult priests to insure the routine of their parents is not disrupted.

Not everyone on Nexus believes that the Skycults are the most effective tool to balance the power between the gods, and the long days recently are swaying those who would be loyal to the Solarator and Siderator to their cause. Foremost among rebellion is Jade, the mayor of Maven (level 4, level 6 for tasks relating to persuasion and deception), whose personal vendetta against the Solarator may be of more concern to her than the withering fields.

The rebellion offers an alternative to the Skycults: the Scorekeepers. Traditionally regarded with fear and distrust, these rare individuals with the Spark have a strong personal impact on the power of the gods. Their unnatural knowledge and unique power to affect the balance once led to their ubiquitous persecution by the Skycults, though more and more often people offer them shelter from the priests rather than turning them in.

One of the Scorekeepers allied with Jade, Pierce, has suggested that manipulating the strange shrines of the Rivenswood might be a solution to the current crisis.

A vast forest called the Rivenswood grows between and around the human settlements. Travel through the forest is strictly prohibited except during harvest times, and then only on carefully marked paths. Beyond the paths lie numerous ancient shrines to the Moon-Veiled Lady and the Sun-Wreathed Lord. Scorekeepers and other outcasts often make their homes in the Rivenswood, away from the persecution of the Skycults.

Deep in the Rivenswood the trees transform into towers of a sepia mineral called empyreanite. Empyreanite oozes a thick liquid that scholars whisper is the source of life in Nexus, though it loses its special properties when it’s taken to another recursion, or a prime world.

The Narrows is a wide, swift river that runs from the center of Overside, tumbles over the edge, and ends in a crystal clear pool in the Rivenswood. It’s the only way to travel between Overside and Underside, and the currents only flow one way.

Overside was home to the recursors who seeded Nexus. Not much remains of their complex, which appears scientific in nature, and certainly not enough to understand their goals in creating the recursion.

A forest much like the Rivenswood has overgrown most of Overside. Identical shrines to those on Underside appear in the forest in positions that mirror perfectly those on Underside, contributing to the idea that Overside was some kind of command center for an experiment carried out in Underside.

Persistent rumors that the original recursors possessed an artifact called the Serpent’s Eye attract recursion miners to scour the forest that has overgrown Overside, though no evidence of its existence has been found. Instead, visitors exploring the forest encounter specters hovering between the trees.

These specters are occasionally recognizable as people who recently died in Underside, and all of them mutter barely comprehensible things. Whether their mutterings are prophecies from the gods themselves or the lost history of the recursion, the specters don’t linger long, and when their essence dissipates, a cypher is left behind.

Most miners are too wary of the fate people with the Spark tend to face in Underside to translate to that side of the recursion and are content to search the forest for treasure. Recently, however, Estate Agent Imichu Urise returned from Underside with no traces the hemophilia he was diagnosed with as a child, and he suspects the empyreanite sap of the Rivenswood.